When I chose to study Nautical Sciences at the Antwerp Maritime Academy, I did so because I wanted to work in long circumnavigation. Navigating and delivering cargo operations is what our four year education has taught us to do.

When I was in the fourth or fifth grade, a friend of my father’s started his Nautical Studies at a later age. That is how I first got in touch with this job. I have an active nature, I enjoy doing hands-on work and I like being outdoors. I had also set my sights on what I considered to be a “great adventure”. Other factors in taking this decision were job security and the fact that it pays well. But in the end, I just really enjoy doing this job.

A work day in the life on a VLCC is very diverse. Especially when you are an Aspirant Officer because you have a broad range of duties: radar navigation, plotting the vessel’s position, determining the astronomical position, executing work on deck and taking charge of administrative tasks. My ambition is to become a Captain one day. Having the responsibility of managing a ship is something I look forward to.

For my second voyage with Euronav I went on board of the Alice in Gunsan, South Korea which had just been delivered. I saw it as an honor to be able to go on board as one of the first crew members. The first ten days felt a little like camping. The cook had to make dinner but we still had to unpack the pots and pans. We stayed in the ship yard for another ten days as there were still some things we needed to take care of before departing. We then headed off to Malaysia for a loading that had to be delivered in Rotterdam. When we reached the English Channel after four months at sea, it really felt like a homecoming.

I enjoy being at sea. Otherwise I wouldn’t do this job. If your mind is set on not seeing land for a while, then it doesn’t really matter anymore. During my voyage on the Hojo we did went off board for an afternoon when we were in Freeport in the Bahamas. The weather was nice, we could do a walk on the beach and have a drink which was a nice change.

The social atmosphere on board is very important. If you can enjoy your free time together, then it’s also easier to work in team during working hours. My Croatian colleague Matija and I baked pancakes for the entire crew when we were on board of the Alice. In the afternoon, while the cook was having his rest, we went looking for flour, milk and eggs. Captain Vanregemorter really appreciated our initiative. Other than that, we often eat steak with fries on Thursdays and Sundays. On Sunday it’s pizza time. The cook also happily makes different kinds of food for people from other nationalities. And of course, it also depends on the Captain’s food preferences. If you have a Belgian Captain, chances are you will be served Belgian food. 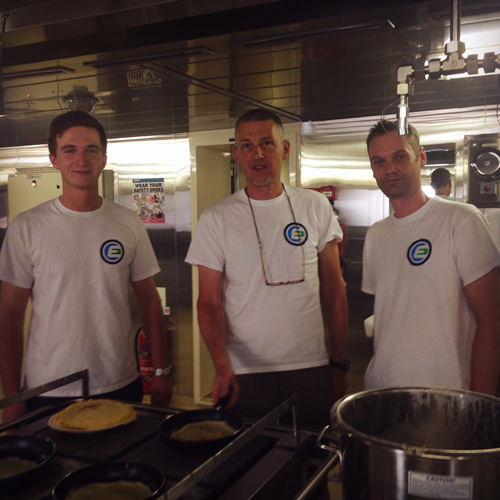 Working with different nationalities is something that I enjoy and I believe it is an interesting part of my job. I consider it a challenge to learn how to work with people from different nationalities. I could only encourage people to choose this life. I can’t think of any disadvantages. It’s a fantastic job.

Extra information about this employee